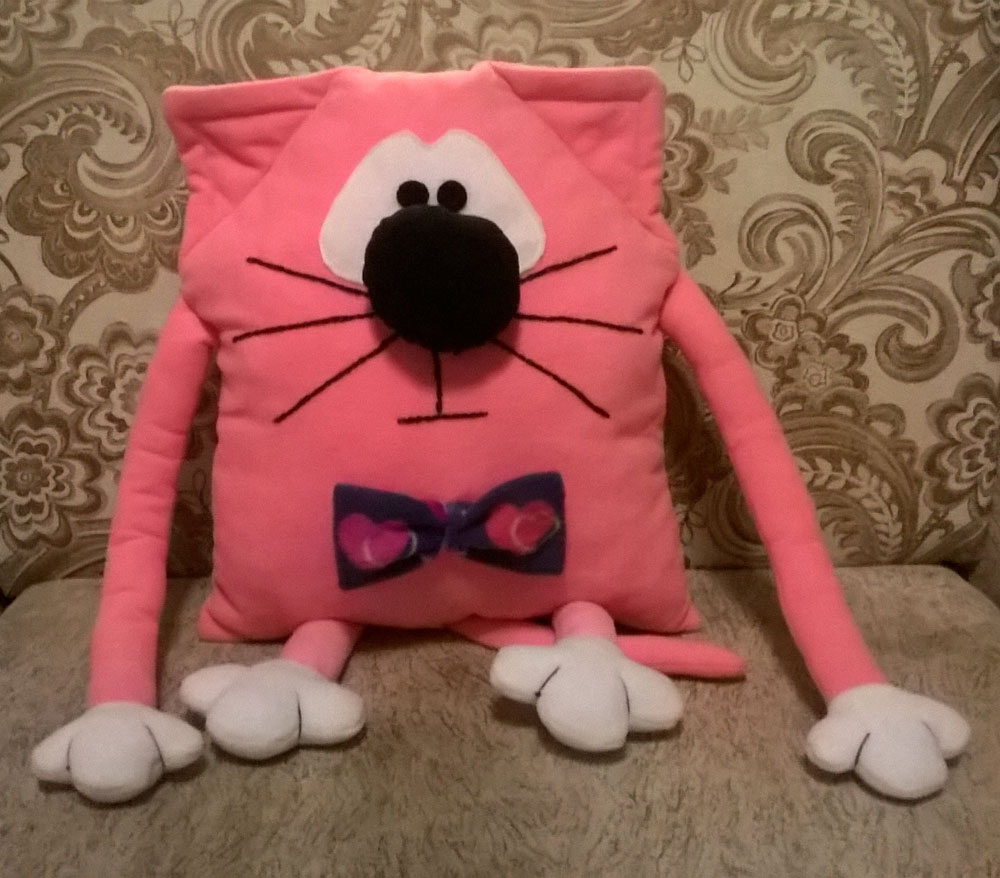 Hello, I decided to sew this original and very soft “Pink Cat” or cat pillow. It can be used both as a toy and as a pillow. To make it, we will need half a meter of pink fleece, black fleece, white fleece, filler, thick black threads, as well as multicolored fleece with any kind of a pattern, we will need it for a bow, and a hot glue gun also. As you’ve already understood, we are preparing all the small details. Sew together the tail parts.
Turn it out and stuff with the filler, but just a little, so that it isn’t too tough and inflexible.
Sew together white and pink paws details.
There should be four such details, two for each of the paws. Fold two details the front side inside and seam along the edges.
Turn out and stuff.
The same way we sew together and stuff the short lower paws.
Make such webs of the black threads on every paw. Mark the middle of the pink base. Sew down the eyes.
Now, attach all the details to their proper places, using needles.
Cover with the second part of the basis and stitch along the pillow edges. Below, leave a stuffing hole.
Get rid of excess fabric in the corners. And turn the pillow out. Let us make soft and very pretty ears for our cat. To do this, measure off 10 cm every which way from the corner, where the ear will be, and connect the points, using a chalk and a ruler.
Stitch with pink thread along the resulting line. At 2 cm from the edge stitch more lines. Do as shown on the photo.
Now let’s stuff our cat with the filler. Sew together. Sew down the nose. Let’s get down to making the bow. Cut out a rectangle 28*13 of size.
Fold it in half and stitch. Stitch along one of the sides.
Turn out to the front side and sew up the second side. Cut a small strip and fix it in the middle of the bow, using a hot glue gun or a needle and thread. Also, see how to sew a chair pad.

Glue the finished bow to the cat. Cut small circles out of black fleece – that will be the eyes. Glue them, using a glue gun. The “Pink Cat” is ready! Now, we know how to sew a cat pillow.